ConnecticutState Weather Alerts
There are currently no active weather alerts.
Skip to content

Below is a more detailed history of the fire company:

The Shelton Volunteer Fire Company #4 Inc. incorporated on June 6, 1933 to provide fire protection to the isolated Pine Rock Park area of south Shelton. The objective of the company is to preserve life and property from fire and other hazards; to bring about a better understanding between this organization and the public: and to cooperate with other organizations engaged in laudable endeavors for the betterment of fire departments and fire protection.

The area neighbors donated land to the company for its initial quarters, which remained the firehouse until 1979 when the company moved to its current location at 722 Long Hill Avenue. Company #4 is one of four fire companies that together comprise the Shelton Fire Department. Each company is manned by well trained volunteers who live or work in the city.

In 1932 a group of residents of Pine Rock Park organized into a Volunteer Fire Company. They constructed a building on a piece of land located on the corner of Algonquin and Seneca Trails which was donated by Robert Davies, owner of the Oronoque Estates, developer of Pine Rock Park.

In 1933, this company was incorporated into the Shelton Volunteer Fire Company #4. They purchased a chemical truck for fire fighting from another local department, ECHO Hose. It was called a Brockway Chemical Fire Truck. The truck was parked next to a field stone fire place and went out on to Algonquin Road. The walls of the fire house were lined with benches from CR&L Bus Company, and in the corner over the furnace was a room for checking hats and coats. The furnace was in the basement and kept this area warm. There also was an open stair case opposite to the hat & coat check room. This led to a recreation room which was used for social activities. Over the years there were additions and alterations to the original building.

The area had a telephone system on the Stratford Bridgeport exchange and the alarms were connected to the Stratford Fire Department. The call would go in the Stratford Fire Department switch board, and the alarm at the Pine Rock Park Fire House was sounded and a telephone land line would tell where the fire was. The cost of this system was picked up by the membership, plus the electricity, heat, and insurance. Each month the bills came to the organization and the members would reach into their pockets to pay the bills.

A strong Ladies Auxiliary was formed which ran dances and socials. They made enough money to erect a kitchen on the other side of the afore mentioned fire place. This was supposed to be a kitchen and large bay but was later turned into a recreation room.

In the mid 1930s with the help of our Ladies Auxiliary and the Echo Hose the company ran a carnival which engulfed an area from Algonquin to Ojibwa and Manhassett to Seneca.

In 1954 Commissioner Raymond Rourke of the Shelton Fire Department sent to Pine Rock Park a 1934 Ahrens Fox pumper to fight fires with.

Commissioner Frank Dobkowski in 1962 purchased a new American LaFrance 750 GPM pumper on a Ford Chassis for the Shelton Volunteer Fire Company #4. The first new truck purchased by the city for a company other than Echo Hose.

The company purchased a rack type truck and this was made into a brush type truck. The 1927 American LaFrance was sold and the 1934 Ahrens Fox was returned to the city.

In 1964 the company put into service the first tanker operation in the city of Shelton with a tank truck donated by Derby Coal and Oil Company. At the same time, the city began picking up the operational expenses of the company.

In 1965 the company purchased a 1937 Ahrens Fox pumper. The company began to establish itself in the Shelton Fire Department and got the appointment of a state fire warden. Started to purchase equipment such as folding water tanks, key stone dump valves; quick connects for hydrants, Water Vac packs. In 1966 replaced the cab and chassis of the tanker. At this time the company had the 1962 American LaFrance, the 1937 Ahrens Fox and the tanker responding to alarms in the area.

With the change of the telephone system to the Huntington Exchange, the alarm system was now activated from Shelton Police Department.

A new Board of Fire Commissioners was elected with one coming from each company and one appointed by the mayor. James Higgins Jr. was the first commissioner elected from Company #4.

In 1970 the Shelton Fire Department purchased a Ford Cab over engine Hahn 750 GPM fire pumper for the Shelton Volunteer Fire Company #4 of Pine Rock Park. The 1970 Hahn won the Best Commercial Fire truck in the 1970 State Convention held in Southington.

In 1972 the company purchased a utility truck that was made into a rescue truck In 1975, Company #4 joined the other three companies and hundreds of mutual aid companies in fighting the largest arson fire in Connecticut history at B.F. Goodrich. Today the site of this fire is a park along the river for the residents of Shelton to enjoy. Goodrich was reincarnated as Latex Foam in Ansonia where it operated for the next twenty three years before again burning to the ground. It is currently located in Company #4’s territory along Route 110 (River Rd). 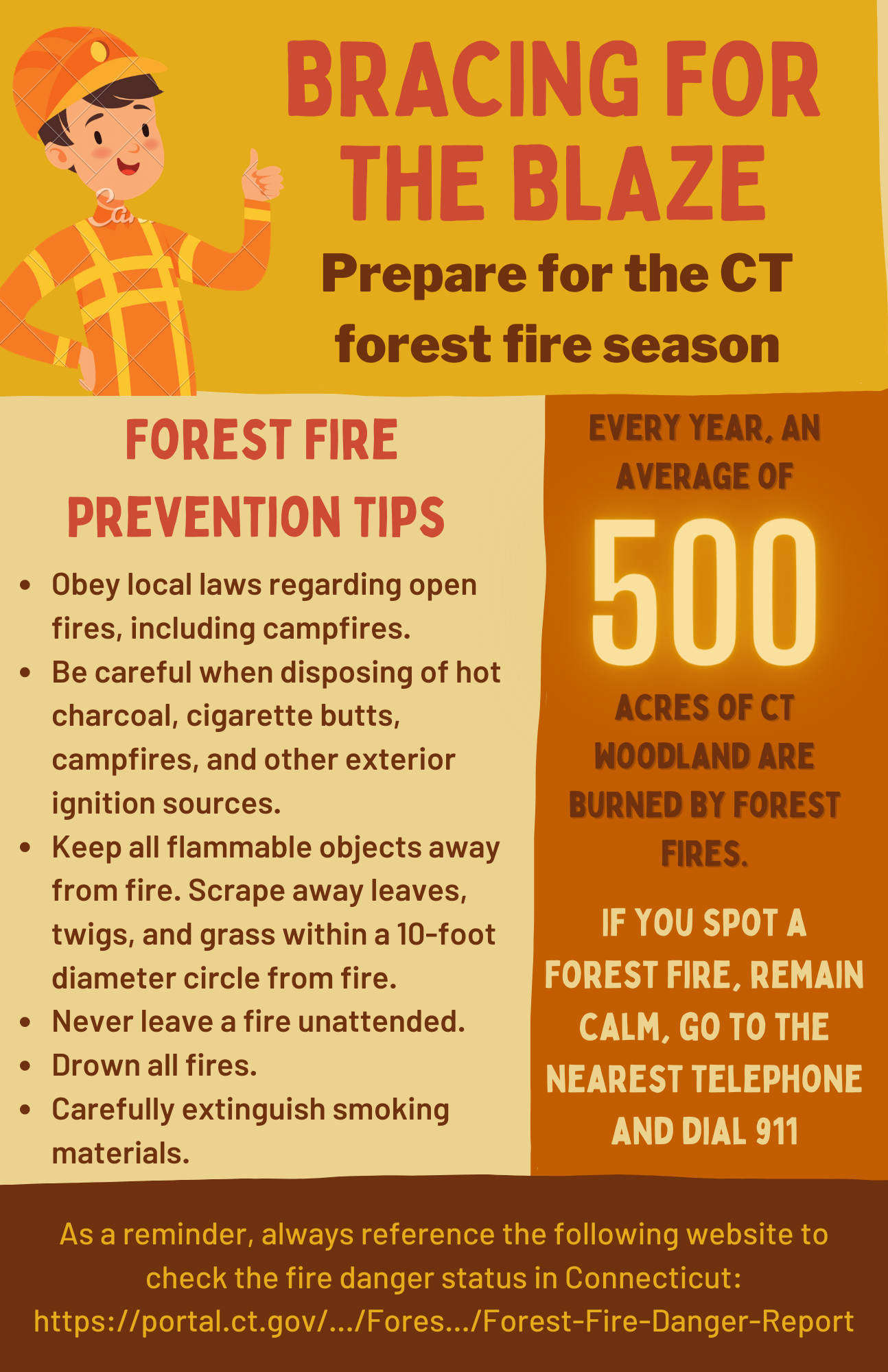 Join us at our Annual Car & Truck Show 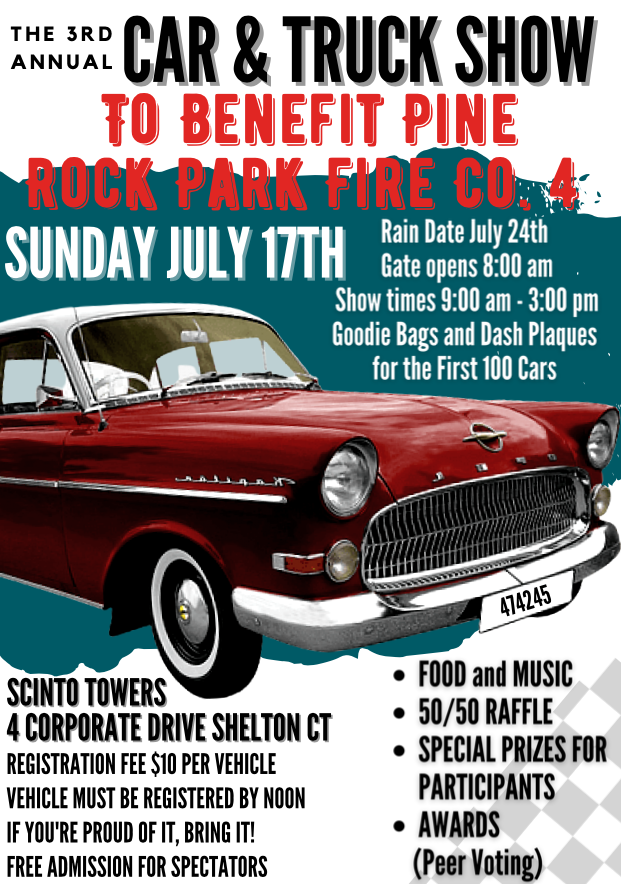 Connecticut
There are currently no active weather alerts.

we need your help

We thank you for your generosity and look forward to your continued support.

You may have missed